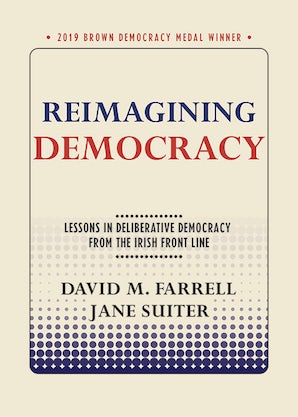 Lessons in Deliberative Democracy from the Irish Front Line

The Lawrence and Lynne Brown Democracy Medal, presented by the McCourtney Institute for Democracy at Penn State, recognizes outstanding individuals, groups, and organizations that produce innovations to further democracy in the United States or around the world.

2019 Brown Democracy Medal winners David M. Farrell and Jane Suiter are co-leads on the Irish Citizens' Assembly Project, which has transformed Irish politics over the past decade. The project started in 2011 and led to a series of significant policy decisions, including successful referenda on abortion and marriage equality.

Thanks to generous funding from The Pennsylvania State University, the ebook editions of this book are available as Open Access (OA) volumes, available from Cornell Open (cornellopen.org) and other Open Access repositories.

David M. Farrell is Head of Politics and International Relations at University College Dublin. He has held visiting positions at the Australian National University, Harvard, Mannheim, and the University of California, Irvine. A specialist in the study of representation, elections, and parties, he has published nineteen books and more than one hundred articles and book chapters.

Jane Suiter is Director of the Institute for Future Media and Journalism and an Associate Professor in the School of Communications at Dublin City University. She studies participation and political engagement in the public sphere, including direct democracy and other modes of engaging the public in decision-making processes such as citizens' assemblies and journalism.