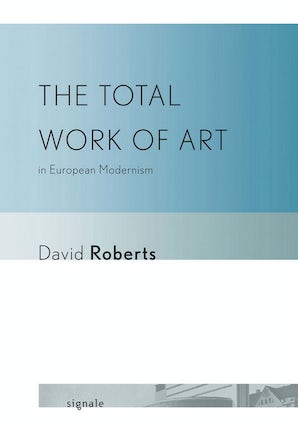 The Total Work of Art in European Modernism is licensed under a Creative Commons Attribution-NonCommercial-NoDerivatives 4.0 International License.

The Total Work of Art in European Modernism

In this groundbreaking book, David Roberts sets out to demonstrate the centrality of the total work of art to European modernism since the French Revolution. The total work of art is usually understood as the intention to reunite the arts into the one integrated whole, but it is also tied from the beginning to the desire to recover and renew the public function of art. The synthesis of the arts in the service of social and cultural regeneration was a particularly German dream, which made Wagner and Nietzsche the other center of aesthetic modernism alongside Baudelaire and Mallarmé.

The history and theory of the total work of art pose a whole series of questions not only to aesthetic modernism and its utopias but also to the whole epoch from the French Revolution to the totalitarian revolutions of the twentieth century. The total work of art indicates the need to revisit key assumptions of modernism, such as the foregrounding of the autonomy and separation of the arts at the expense of the countertendencies to the reunion of the arts, and cuts across the neat equation of avant-gardism with progress and deconstructs the familiar left-right divide between revolution and reaction, the modern and the antimodern. Situated at the interface between art, religion, and politics, the total work of art invites us to rethink the relationship between art and religion and art and politics in European modernism.

In a major departure from the existing literature David Roberts argues for twin lineages of the total work, a French revolutionary and a German aesthetic, which interrelate across the whole epoch of European modernism, culminating in the aesthetic and political radicalism of the avant-garde movements in response to the crisis of autonomous art and the accelerating political crisis of European societies from the 1890s forward.

"With this volume, Roberts completes a trilogy devoted to European modernism. Art and Enlightenment (1991) offered a critical assessment of Adorno's theory of modern music, while Dialectic of Romanticism proposed a 'civil' alternative to Romantic nostalgia and Enlightenment progressivism. This new book, on the tangled legacy of Richard Wagner's Gesamtkunstwerk (‘total work of art’), is equally original, in approach and detailed readings. . . . The author traces its origins to the French Revolution and German Romanticism, and then monitors the cultural resonance of Wagner's Parsifal, via Nietzsche and Mallarmé, which extends to the 20th-century avant-garde—particularly its odd mix of differentiation/synthesis of the arts, and its theatrical fusion of art and life. Finally he surveys the ‘sublime’ politics of Fascist spectacle, which Walter Benjamin famously reduced to the ‘aestheticization of politics.’ If the Nazis seem finally to have discredited the entire tradition, it nevertheless finds a spectral afterlife in contemporary theme parks and cyberspace. Ambitious, densely written, yet rewarding, this volume caps a remarkable achievement. Summing Up: Highly recommended."—Choice (1 September 2012)

"There is much to admire in Roberts' study of the total work of art and he convincingly makes the case for its importance. . . . Roberts’ book provides a hugely insightful study of the total work of art. Most helpfully he uses this recurring motif as a way of breaking down conventional narratives about modernist politics, spirituality and aesthetic technique."—Claire Warden, Consciousness, Spirituality and the Arts (August 2013)

"Roberts portrays the total work of art not simply as a particular and peripheral genre of modern culture but rather as a fundamental idea that responded to the experience of desacralization in modernity . . . This book is impressive in sweep, thought-provoking in its challenges to accepted cultural schemas, and fascinating in the details it uncovers along the way. In short: a grand synthetic account that truly holds together. It represents an important contribution to the re-thinking of modernism." —Peter Zusi, University College London,Monatshefte(2014)

David Roberts is Professor Emeritus of German at Monash University. He is the author of Art and Enlightenment: Aesthetic Theory after Adorno and coauthor of Dialectic of Romanticism. A Critique of Modernism, among many other books.

The Total Work of Art in European Modernism is licensed under a Creative Commons Attribution-NonCommercial-NoDerivatives 4.0 International License.