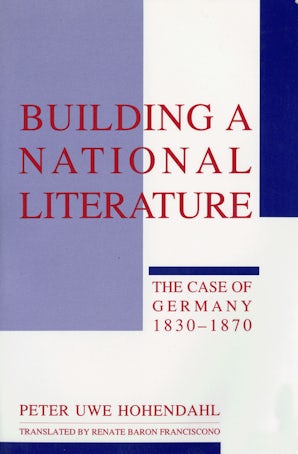 Building a National Literature is licensed under a Creative Commons Attribution-NonCommercial-NoDerivatives 4.0 International License.

Building a National Literature boldly takes issue with traditional literary criticism for its failure to explain how literature as a body is created and shaped by institutional forces. Peter Uwe Hohendahl approaches literary history by focusing on the material and ideological structures that determine the canonical status of writers and works. He examines important elements in the making of a national literature, including the political and literary public sphere, the theory and practice of literary criticism, and the emergence of academic criticism as literary history. Hohendahl considers such key aspects of the process in Germany as the rise of liberalism and nationalism, the delineation of the borders of German literature, the idea of its history, the understanding of its cultural function, and the notion of a canon of major and minor authors.

"The democratic, reform-minded spirit that held center stage in the revolutionary months of October and November of 1989 has an obvious parallel in the efforts to construct nationhood in 1848 based on republican and participatory principles."

Building a National Literature is licensed under a Creative Commons Attribution-NonCommercial-NoDerivatives 4.0 International License.