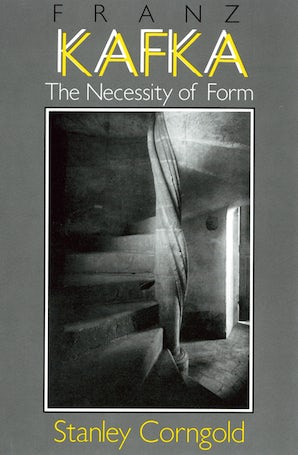 The Necessity of Form

In Stanley Corngold’s view, the themes and strategies of Kafka’s fiction are generated by a tension between his concern for writing and his growing sense of its arbitrary character. Analyzing Kafka’s work in light of "the necessity of form," which is also a merely formal necessity, Corngold uncovers the fundamental paradox of Kafka’s art and life. The first section of the book shows how Kafka’s rhetoric may be understood as the daring project of a man compelled to live his life as literature. In the central part of the book, Corngold reflects on the place of Kafka within the modern tradition, discussing such influential precursors of Cervantes, Flaubert, and Nietzsche, whose works display a comparable narrative disruption. Kafka’s distinctive narrative strategies, Corngold points out, demand interpretation at the same time they resist it. Critics of Kafka, he says, must be aware that their approaches are guided by the principles that Kafka’s fiction identifies, dramatizes, and rejects.

"The remarkable convergence of form and content in this book brings it close to a work of art."

"For those readers who have admired Stanley Corngold’s essays on Kafka this volume will be particularly welcome. It collects his work on Kafka written over the past two decades. Corngold is at all times concerned with the issue of writing and often with figures (metaphor, chiasmus) at work in Kafka’s prose. This single-mindedness of purpose produces a coherence in the volume and enables Corngold to do what he does best: rhetorical and philosophical analysis of specific words and passages and their implications for Kafka’s fictional logic."

Stanley Corngold is Professor of German and Comparative Literature, Emeritus, at Princeton University. He is the author of Complex Pleasure: Forms of Feeling in German Literature, Lambent Traces: Franz Kafka and coauthor of Franz Kafka: The Ghosts in the Machine.