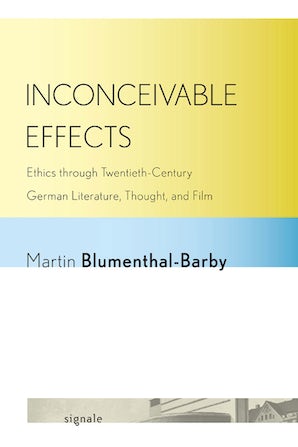 In Inconceivable Effects, Martin Blumenthal-Barby reads theoretical, literary and cinematic works that appear noteworthy for the ethical questions they raise. Via critical analysis of writers and filmmakers whose projects have changed our ways of viewing the modern world—including Hannah Arendt, Franz Kafka, Walter Benjamin, the directors of Germany in Autumn, and Heiner Mueller—these essays furnish a cultural base for contemporary discussions of totalitarian domination, lying and politics, the relation between law and body, the relation between law and justice, the question of violence, and our ways of conceptualizing "the human."

A consideration of ethics is central to the book, but ethics in a general, philosophical sense is not the primary subject here; instead, Blumenthal-Barby suggests that whatever understanding of the ethical one has is always contingent upon a particular mode of presentation (Darstellung), on particular aesthetic qualities and features of media. Whatever there is to be said about ethics, it is always bound to certain forms of saying, certain ways of telling, certain modes of narration. That modes of presentation differ across genres and media goes without saying; that such differences are intimately linked with the question of the ethical emerges with heightened urgency in this book.

"Blumenthal-Barby (Rice Univ.) explores literary and scholarly discussions of overtly negative topics such as doubt, lying, death (by torture), paradoxical justice, violence, terrorism, and enmity in 20th-century German texts (including one film), all in the context of an ethics of literary representation…. The author provides footnotes and helpful, on occasion critically reflective, English translations of quotations throughout…. Specialists familiar with the texts will be able to absorb the layered analysis. Summing Up: Recommended. Graduate students and faculty." — Choice (January 2014)

"Inconceivable Effects is a valuable and suggestive book that advances our understanding of the ways in which ethical questions become visible as aesthetically mediated phenomena of presentation. Martin Blumenthal-Barby's wager is that questions of ethics are not merely negotiated in particular works on the level of their thematic content but rather are brought into focus when the critic considers their formal modes of presentation, that is, their singular, idiomatic, and performative qualities. In short, Blumenthal-Barby demonstrates that the idiomatic and aesthetic dimensions of the literary texts, theoretical works, and cinematic events that he treats pose structural questions of ethicality. This ethicality is to be understood not as a set of normative problems to be negotiated on the level of the concept alone but rather in terms of the very logic in which these questions are formulated by the works’ presentational specificity. Blumenthal-Barby does a shrewd job bringing into fruitful constellation a number of seminal works from the German tradition that contribute to our understanding of the conjunction between the aesthetic and the ethical thus understood. The result is a most engaging piece of scholarship."—Gerhard Richter, Brown University

"This smart, ambitious book traces the relationship between ethics and poetics. Discussing the work of Hannah Arendt, Walter Benjamin, Franz Kafka, Heiner Müller, and a group of German film directors, Martin Blumenthal-Barby argues that the styles of these theorists, authors, and filmmakers produce not a particular ethical position but ethics effects, not an ethical stance but an (aesthetic) practice of ethics. The ways in which authors engage with their genres amount to a staging of the ethical dilemmas that are addressed thematically in the texts. Ultimately, this ethics effect—or ethics as aesthetic practice—is the ethics of the singular, always tied to a specific text and its form. Inconceivable Effects brillantly demonstrates the value of dismantling the barriers between aesthetic practice and political theory."—Julia Hell, University of Michigan

Martin Blumenthal-Barby is Assistant Professor of German and Film Studies at Rice University.