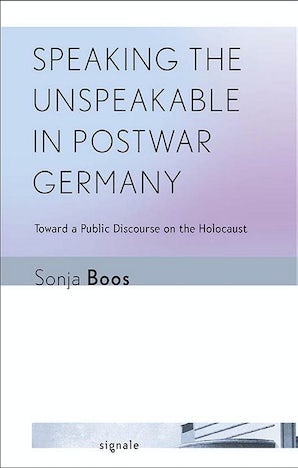 Speaking the Unspeakable in Postwar Germany is licensed under a Creative Commons Attribution-NonCommercial-NoDerivatives 4.0 International License.

Speaking the Unspeakable in Postwar Germany

Toward a Public Discourse on the Holocaust

Speaking the Unspeakable in Postwar Germany is an interdisciplinary study of a diverse set of public speeches given by major literary and cultural figures in the 1950s and 1960s. Through close readings of canonical speeches by Hannah Arendt, Theodor W. Adorno, Ingeborg Bachmann, Martin Buber, Paul Celan, Uwe Johnson, Peter Szondi, and Peter Weiss, Sonja Boos demonstrates that these speakers both facilitated and subverted the construction of a public discourse about the Holocaust in postwar West Germany. The author's analysis of original audio recordings of the speech events (several of which will be available on a companion website) improves our understanding of the spoken, performative dimension of public speeches.While emphasizing the social constructedness of discourse, experience, and identity, Boos does not neglect the pragmatic conditions of aesthetic and intellectual production—most notably, the felt need to respond to the breach in tradition caused by the Holocaust. The book thereby illuminates the process by which a set of writers and intellectuals, instead of trying to mend what they perceived as a radical break in historical continuity or corroborating the myth of a "new beginning," searched for ways to make this historical rupture rhetorically and semantically discernible and literally audible.

"Speaking the Unspeakable in Postwar Germany is a well-honed, meticulously researched, and theoretically grounded study of public speeches that sought to intervene into the memory culture of postwar West Germany. By considering a wide range of sources, Sonja Boos manages to establish the public speech as a genre in its own right, one that became crucial in challenging the biases and blind spots of West German Vergangenheitsbewälitgung. Indeed, Boos's book confers upon the public speech an entirely new status in the study of postwar German culture, history, and memory. From political to psychoanalytical theory, from discourse analysis to memory studies, Boos brings a range of theoretical approaches to bear in her insightful readings of the speeches at hand. The successful integration of classical rhetoric, speech act theory, and public sphere theory in Boos's theoretical framework is particularly laudable."

"This is an ambitious and important book. Sonja Boos displays extensive familiarity with the early cultural history of West Germany, presenting a valuable series of snapshots of intellectual life there through the mid-1960s, focusing on the engagement of public intellectuals in memory of the Holocaust. Speaking the Unspeakable in Postwar Germany offers complex and insightful analyses of these interventions."

- Russell A. Berman, Walter A. Haas Professor in the Humanities, Stanford University

Sonja Boos is Assistant Professor of German at the University of Oregon.

Speaking the Unspeakable in Postwar Germany is licensed under a Creative Commons Attribution-NonCommercial-NoDerivatives 4.0 International License.