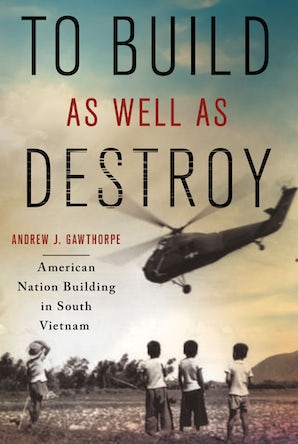 To Build as Well as Destroy is licensed under a Creative Commons Attribution-NonCommercial-NoDerivatives 4.0 International License.

To Build as Well as Destroy

For years, the so-called better-war school of thought has argued that the United States built a legitimate and viable non-Communist state in South Vietnam in the latter years of the Vietnam War and that it was only the military abandonment of this state that brought down the Republic of Vietnam. But Andrew J. Gawthorpe, through a detailed and incisive analysis, shows that, in fact, the United States failed in its efforts at nation building and had not established a durable state in South Vietnam.

Drawing on newly opened archival collections and previously unexamined oral histories with dozens of U.S. military officers and government officials, To Build as Well as Destroy demonstrates that the United States never came close to achieving victory in the late 1960s and early 1970s. Gawthorpe tells a story of policy aspirations and practical failures that stretches from Washington, D.C., to the Vietnamese villages in which the United States implemented its nationbuilding strategy through the Office of Civil Operations and Revolutionary Development Support known as CORDS. Structural factors that could not have been overcome by the further application of military power thwarted U.S. efforts to build a viable set of non-Communist political, economic, and social institutions in South Vietnam.

To Build as Well as Destroy provides the most comprehensive account yet of the largest and best-resourced nation-building program in U.S. history. Gawthorpe's analysis helps contemporary policy makers, diplomats, and military officers understand the reasons for this failure. At a moment in time when American strategists are grappling with military and political challenges in Afghanistan, Iraq, and Syria, revisiting the historical lessons of Vietnam is a worthy endeavor.

"Gawthorpe... offers a significant, thoughtful analysis of the failed U.S. experience that spanned nearly two decades. This deeply researched book explores the earnest but futile attempt, involving at least four American presidencies, to create a viable nation-state in the southern half of Vietnam. Possibly no previous author has so doggedly focused on the nation-building endeavor that was beset by a lack of public support, in Vietnam and the U.S.; inadequate knowledge by American operatives of conditions on the ground; and the relentless nature of the communist leadership."

"Gawthorpe's scholarship is excellent, and he gets much right concerning the pitfalls and shortcomings of allied nation-building efforts at the local level.... To Build as Well as Destroy is a useful cautionary tale."

- War on the Rocks

"Andrew Gawthorpe’s book is an excellent study of the CORDS program implemented by the United States in Vietnam between 1967-1973. I know of no other book that covers the pacification effort in such detail. This work is a significant contribution to the literature on American nation-building efforts in Vietnam."

- Gregory A. Daddis, Chapman University, and author of Withdrawal

"Andrew J. Gawthorpe brilliantly and convincingly demonstrates that Vietnam was no lost victory. In To Build as Well as Destroy, he shows that, despite the assurances of counterinsurgency technocrats, T.E. Lawrence folklorists, and nation-building soldiers, pacification proved to be a failed doctrine for a failed war."

"Andrew Gawthorpe draws on prodigious research to uncover the little-known history of American efforts to build a durable South Vietnam during the peak years of U.S. military embroilment in Southeast Asia. This elegant study is essential reading for students of the Vietnam War and anyone interested in the challenges of nation-building."

- Mark Atwood Lawrence, University of Texas at Austin, author of The Vietnam War

"To Build As Well As To Destroy is a step forward for scholarship on international nation—and state—building interventions. This is a major entry in the burgeoning literature on the Vietnam War’s later years, and a welcome addition to the debate over international interventions."

- Paul D. Miller, Scowcroft Center for Strategy and Security at the Atlantic Council, and author of American Power and Liberal Order

Andrew J. Gawthorpe is a University Lecturer at Leiden University. He previously held positions as a teaching fellow at the UK Defence Academy, a research fellow at the Harvard Kennedy School, and a civil servant in the British Cabinet Office. You can read his work in publications such as Foreign Affairs, The Boston Globe, Los Angeles Times, The Guardian, Stars and Stripes, and The National Interest, and follow him on Twitter @andygawt.

To Build as Well as Destroy is licensed under a Creative Commons Attribution-NonCommercial-NoDerivatives 4.0 International License.