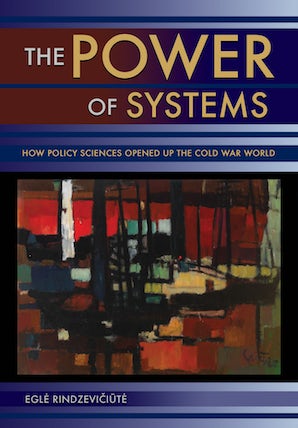 The Power of Systems is licensed under a Creative Commons Attribution-NonCommercial-NoDerivatives 4.0 International License.

The Power of Systems

How Policy Sciences Opened Up the Cold War World

In The Power of Systems, Egle Rindzeviciute introduces readers to one of the best-kept secrets of the Cold War: the International Institute of Applied Systems Analysis, an international think tank established by the U.S. and Soviet governments to advance scientific collaboration. From 1972 until the late 1980s IIASA in Austria was one of the very few permanent platforms where policy scientists from both sides of the Cold War divide could work together to articulate and solve world problems. This think tank was a rare zone of freedom, communication, and negotiation, where leading Soviet scientists could try out their innovative ideas, benefit from access to Western literature, and develop social networks, thus paving the way for some of the key science and policy breakthroughs of the twentieth century.Ambitious diplomatic, scientific, and organizational strategies were employed to make this arena for cooperation work for global change. Under the umbrella of the systems approach, East-West scientists co-produced computer simulations of the long-term world future and the anthropogenic impact on the environment, using global modeling to explore the possible effects of climate change and nuclear winter. Their concern with global issues also became a vehicle for transformation inside the Soviet Union. The book shows how computer modeling, cybernetics, and the systems approach challenged Soviet governance by undermining the linear notions of control on which Soviet governance was based and creating new objects and techniques of government.

"The Power of Systems provides a compelling summary of the rise of the systems approach globally. Egle Rindzevičiūtė describes the Soviet component of that rise and Soviet-Western cooperation in the field and provides a new level of detail through extensive and informative interviews. Rindzevičiūtė makes a strong case for the view that the cooperation was not just diplomatic puffery, but a serious phenomenon that had real effects on Soviet–Western relations and the way the two sides saw and behaved in the world."

"In The Power of Systems, Eglė Rindzevičiūtė offers a compelling account of the convergence of American systems analysis and Soviet cybernetics in a picturesque Austrian castle. Using a wide range of rarely cited archival materials as well as revealing personal interviews, she shows how Cold War scientific diplomacy produced real and influential results. Attuned to ideas and institutions, to personalities and most importantly to power, Rindzevičiūtė provides a model for historical scholarship on late Soviet science and on East-West connections in the Cold War."

"In this deeply researched book, Eglė Rindzevičiūtė tells the story of a unique Cold War institution, the International Institute of Applied Systems Analysis, located in Laxenburg, Austria. Here scientists and political leaders from the Soviet Union and the United States met in the years after 1972 to discuss, in the framework of the new field of systems analysis, such problems as acid rain, nuclear winter, the impact of technology on society, and the possibility of 'neutral' mathematical modeling of civilization’s problems. Was it a naïve and doomed effort? Rindzevičiūtė gives us a sophisticated answer to this question."

- Loren Graham, Massachusetts Institute of Technology, co-author of Science in the New Russia

"The Power of Systems is a first-rate monograph, best suited for graduate students, scholars of Soviet Russia and the Cold War, and scholars of the history and sociology of science."

"Combining a policy analyst's sensitivity to practical politics and a historian's instinct for contingency and context.... Rindzevičiūtė has provided a rare glimpse through the lens of boutique institutional history of a time and place."

Eglė Rindzevičiūtė is a Lecturer in Sociology at Kingston University, London. She is the author of Constructing Soviet Cultural Policy: Cybernetics and Governance in Lithuania after World War II and coeditor of The Struggle for the Long-Term in Transnational Science and Politics: Forging the Future.

The Power of Systems is licensed under a Creative Commons Attribution-NonCommercial-NoDerivatives 4.0 International License.