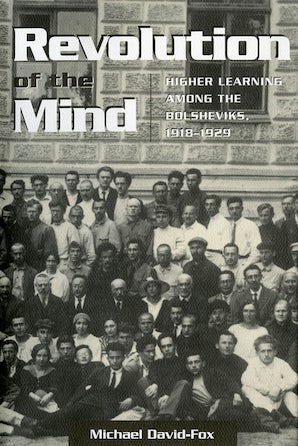 Revolution of the Mind is licensed under a Creative Commons Attribution-NonCommercial-NoDerivatives 4.0 International License.

Revolution of the Mind

Using archival materials never previously accessible to Western scholars, Michael David-Fox analyzes Bolshevik Party educational and research initiatives in higher learning after 1917. His fresh consideration of the era of the New Economic Policy and cultural politics after the Revolution explains how new communist institutions rose to parallel and rival conventional higher learning from the Academy of Sciences to the universities. Beginning with the creation of the first party school by intellectuals on the island of Capri in 1909, David-Fox argues, the Bolshevik cultural project was tightly linked to party educational institutions. He provides the first account of the early history and politics of three major institutions founded after the Revolution: Sverdlov Communist University, where the quest to transform everyday life gripped the student movement; the Institute of Red Professors, where the Bolsheviks sought to train a new communist intellectual or red specialist; and the Communist Academy, headquarters for a planned, collectivist, proletarian science.

"Michael David-Fox uses the development of the party's higher educational system in the 1920s to argue for important continuities between the NEP period and the Great Break. This is an important book for anyone with a serious interest in the evolution of Soviet political culture."

"This is a fine work, coherently presented and argued and supported by an impressive array of original and secondary sources. It contributes substantially to a more sophisticated understanding of the 1920s and the Stalinist period that followed."

"This meticulously researched book is a rich mix of fascinating detail, culled from newly opened archives, and a broad vision of the early Soviet period."

Michael David-Fox is Professor in the Edmund A. Walsh School of Foreign Service and Department of History at Georgetown University and a founding and executive editor of Kritika: Explorations in Russian and Eurasian Studies. He is the author of several books, most recently Crossing Borders: Modernity, Ideology, and Culture in Soviet Russia.

Revolution of the Mind is licensed under a Creative Commons Attribution-NonCommercial-NoDerivatives 4.0 International License.