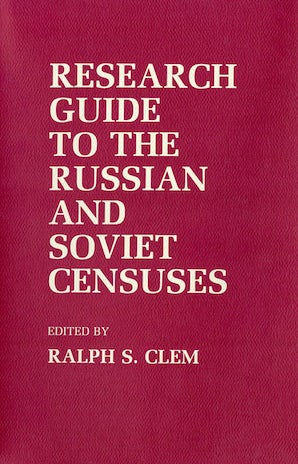 Research Guide to the Russian and Soviet Censuses is licensed under a Creative Commons Attribution-NonCommercial-NoDerivatives 4.0 International License.

Research Guide to the Russian and Soviet Censuses

Taken together, the Russian census of 1897 and the Soviet censuses of 1926, 1959, 1970, and 1979 constitute the largest collection of empirical data available on that country, but until the publication of this book in 1986, the daunting complexity of that material prevented Western scholars from exploiting the censuses fully. This book is both a guide to the use of and a detailed index to these censuses. The first part of the book consists of eight essays by specialist on the USSR, six of them dealing with the use of census materials and the availability of data for research on ethnicity and language, marriage and the family, education and literacy, migration and organization, age structure, and occupations. The second part, a comprehensive index for all the published census, presents more than six hundred annotated entries for the census tables, a keyword index that enables researchers to find census data by subject, and a list of political-administrative units covered in each census.

"It is hoped that this volume will increase the use of Russian and Soviet census materials. Although they are difficult to use, this task has now been rendered easier. The book gives an excellent overview of the possibilities for population research on the Soviet Union. The index and research guide will be valuable for many years to come."

Research Guide to the Russian and Soviet Censuses is licensed under a Creative Commons Attribution-NonCommercial-NoDerivatives 4.0 International License.