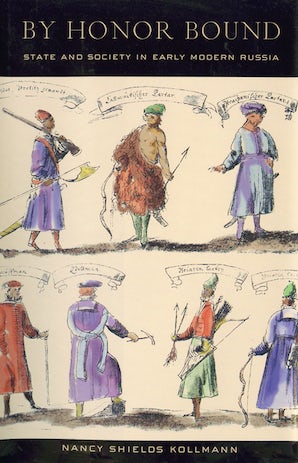 By Honor Bound is licensed under a Creative Commons Attribution-NonCommercial-NoDerivatives 4.0 International License.

In the sixteenth and seventeenth centuries, Russians from all ranks of society were bound together by a culture of honor. Here one of the foremost scholars of early modern Russia explores the intricate and highly stylized codes that made up this culture. Nancy Shields Kollmann describes how these codes were manipulated to construct identity and enforce social norms—and also to defend against insults, to pursue vendettas, and to unsettle communities. She offers evidence for a new view of the relationship of state and society in the Russian empire, and her richly comparative approach enhances knowledge of statebuilding in premodern Europe. By presenting Muscovite state and society in the context of medieval and early modern Europe, she exposes similarities that blur long-standing distinctions between Russian and European history.Through the prism of honor, Kollmann examines the interaction of the Russian state and its people in regulating social relations and defining an individual's rank. She finds vital information in a collection of transcripts of legal suits brought by elites and peasants alike to avenge insult to honor. The cases make clear the conservative role honor played in society as well as the ability of men and women to employ this body of ideas to address their relations with one another and with the state. Kollmann demonstrates that the grand princes—and later the tsars—tolerated a surprising degree of local autonomy throughout their rapidly expanding realm. Her work marks a stark contrast with traditional Russian historiography, which exaggerates the power of the state and downplays the volition of society.

"Based on extensive archival research, Kollmann's book is a groundbreaking study of early modern Russia. Reflecting a thorough familiarity with social science theory, the author argues in support of a new periodization of Russian history on the basis of her findings and for something of a 'convergence' in the Western and Russian historiography of relations between state and society. Required reading for all graduate students and specialists alike."

"The codification of 'honor,' Nancy Kollmann tells us in her impressive book, coincided with the expansion of the Muscovite state between the fifteenth and seventeenth centuries. The incorporation of new territories, the burgeoning size of the Muscovite court, and the necessity of integrating newly conquered provincial elites into the political order necessitated codes that simultaneously co-opted these elites into the political order and differentiated them from the older Muscovite serving men at court."

"This book challenges many accepted tenets, including the type of state erected in Muscovy, the basic periodization of Russian history, and the emergence of new identities and mentalities. It deserves to be read widely."

"This is an important, imaginative, well-researched work of history. The author invokes an impressive range of scholarship, theoretical and comparative, to place her findings in a broader perspective."

"This is the first book in any language on Muscovite conceptions of honor, and the author's handling of this topic opens to view a broad spectrum of Muscovite culture and society. The research is of irreproachable quality, and the interpretations are completely convincing."

Nancy Shields Kollmann is William H. Bonsall Professor of History at Stanford University. She is the author of Crime and Punishment in Early Modern Russia and Kinship and Politics: The Making of the Muscovite Political System.

By Honor Bound is licensed under a Creative Commons Attribution-NonCommercial-NoDerivatives 4.0 International License.