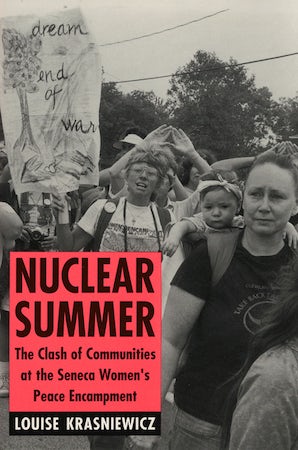 The Clash of Communities at the Seneca Women's Peace Encampment

When thousands of women gathered in 1983 to protest the stockpiling of nuclear weapons at a rural upstate New York military depot, the area was shaken by their actions. What so disturbed residents that they organized counterdemonstrations, wrote hundreds of letters to local newspapers, verbally and physically harassed the protestors, and nearly rioted to stop one of the protest marches? Louise Krasniewicz reconstructs the drama surrounding the Women’s Encampment for a Future of Peace and Justice in Seneca County, New York, analyzing it as a clash both between and within communities. She shows how debates about gender and authority—including questions of morality, patriotism, women’s roles, and sexuality—came to overshadow arguments about the risks of living in a nuclear world. Vivid ethnography and vibrant social history, this work will engage readers interested in American culture, women’s studies, peace studies, and cultural anthropology.

"Nuclear Summer cuts through conceptual chain-link fences and applies the rich intersection of feminist and poststructural analyses to unravel complicated tensions that exploded during the summer of 1983 at the Seneca Women's Peace Encampment. Krasniewicz leads the reader through historical contexts of the county, the formation of the encampment, initial perceptions of the peace camp by the local community, and the development of the relationship between camp women and members of the local community. Analysis of conversations, videotapes, brochures, clothing, songs and ritual, protest events, posters, and editorial letters make it clear that the emergent clashes did not necessarily arise from differing opinions over whether the United States should produce, store, and deploy nuclear weapons but instead were linked intimately to Foucauldian-type wars concerning notions of 'real women' and 'good Americans.'"

Louise Krasniewicz is an artist and Adjunct Assistant Professor of Anthropology at the University of Pennsylvania.