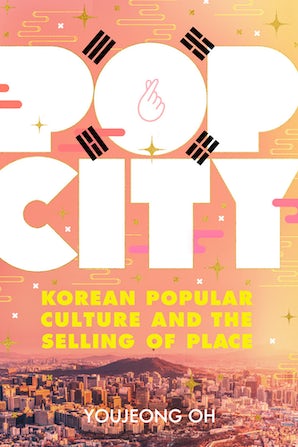 Korean Popular Culture and the Selling of Place

Pop City examines the use of Korean television dramas and K-pop music to promote urban and rural places in South Korea. Building on the phenomenon of Korean pop culture, Youjeong Oh argues that pop culture-featured place selling mediates two separate domains: political decentralization and the globalization of Korean popular culture. The local election system introduced in the mid 90s has stimulated strong desires among city mayors and county and district governors to develop and promote their areas. Riding on the Korean Wave—the overseas popularity of Korean entertainment, also called Hallyu—Korean cities have actively used K-dramas and K-pop idols in advertisements designed to attract foreign tourists to their regions. Hallyu, meanwhile, has turned the Korean entertainment industry into a speculative field into which numerous players venture by attracting cities as sponsors.

By analyzing the process of culture-featured place marketing, Pop City shows that urban spaces are produced and sold just like TV dramas and pop idols by promoting spectacular images rather than substantial physical and cultural qualities. Popular culture-associated urban promotion also uses the emotional engagement of its users in advertising urban space, just as pop culture draws on fans’ and audiences’ affective commitments to sell its products. Oh demonstrates how the speculative, image-based, and consumer-exploitive nature of popular culture shapes the commodification of urban space and ultimately argues that pop culture–mediated place promotion entails the domination of urban space by capital in more sophisticated and fetishized ways.

"The book is the result of research in English and Korean works, and a basic analysis of ideas of South Korea as a unique object; yet a firmer foundation in psychological and sociological analysis or historical examination of ideas of place and identity would have made the book more substantial. The author uses anecdotal evidence to illustrate examples of South Korea's change, but fails to answer the greater questions of why Hallyu drove redevelopment of identity and urban development and what that drive accomplished."

"Pop City provides a compelling analysis of contemporary popular culture in South Korea. This book documents how Korean producers harnessed the global popularity of K-Pop to persuade local municipalities to finance the production of dramas in exchange for place branding. A novel rereading of K-pop, the result is a masterpiece that will appeal to readers interested in place branding and South Korean popular culture."

- Gabriella Lukacs, Associate Professor in the Department of Anthropology, University of Pittsburgh

"The significance of Youjeong Oh’s Pop City lies in the fact that it covers urban policy, developmentalism, popular culture and tourism, and affect, while enabling readers to see these aspects as a nexus of contingent assemblages. It will appeal to a multidisciplinary audience and provide significant contributions to urban theory, development studies, geography, ethnographic studies, media and communication studies, affect theories, and Korean studies."

- Jesook Song, Professor in the Department of Anthropology, University of Toronto

Youjeong Oh is Assistant Professor at the University of Texas at Austin. This is her first book.