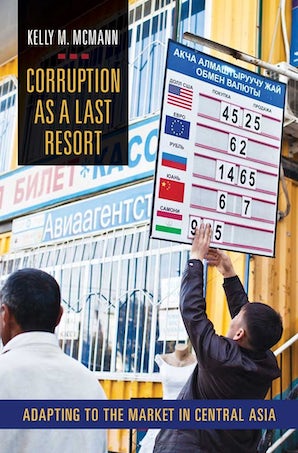 Corruption as a Last Resort is licensed under a Creative Commons Attribution-NonCommercial-NoDerivatives 4.0 International License.

Corruption as a Last Resort

Adapting to the Market in Central Asia

Why do ordinary people engage in corruption? Kelly M. McMann contends that bureaucrats, poverty, and culture do not force individuals in Central Asia to pay bribes, use connections, or sell political support. Rather, corruption is a last resort when relatives, groups in society, the market, and formal government programs cannot provide essential goods and services. Using evidence from her long-term research in Kazakhstan and Kyrgyzstan, McMann shows that Islamic institutions, secular charities, entrepreneurs, and banks cannot provide the jobs and credit people need. This drives individuals to illicitly seek employment and loans from government officials.A leading cause of this resource scarcity is market reform, as demonstrated by McMann's analysis of these countries as well as of Uzbekistan and global data. Market reform without supporting institutions, such as credit registries and antimonopoly measures, limits the resources available from the market and societal groups. McMann finds that in these circumstances only those individuals who have affluent relatives have an alternative to corruption.By focusing on ordinary people, McMann offers a new understanding of corruption. Previously, our knowledge was largely restricted to government officials' role in illicit exchanges. From her novel approach comes a useful policy insight: supplying ordinary people with alternatives to corruption is a fundamental and important anticorruption strategy.

"The work is overall a most welcome addition to the literature on corruption in post-communist states, while its underlying and original focus on corruptors rather than corrupt officials provides important new perspectives on corruption in general."

"This innovative theory invests in a new 'corruption from below' perspective—that considers ordinarypeople instead of elites—offering new argumentations that criticise a mere/immediate ‘market’ concept.... McMann has produced a fundamental book that will surely contribute to the research in anti-corruption studies creating a consistent basis for further research."

"Most studies of corruption focus on large-scale rent-seeking behavior of political elites. Corruption as a Last Resort, in refreshing contrast, focuses on citizens' incentives for engaging—or not engaging—in corruption so as to secure scarce resources. Kelly M. McMann provides helpful insights into painful and partial market reforms in Kazakhstan and Kyrgyzstan and the absence of economic reforms in Uzbekistan."

Corruption as a Last Resort is licensed under a Creative Commons Attribution-NonCommercial-NoDerivatives 4.0 International License.