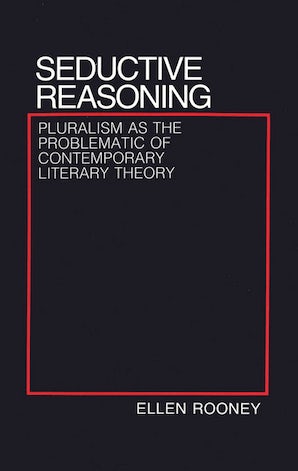 Pluralism as the Problematic of Contemporary Literary Theory

Seductive Reasoning takes a provocative look at contemporary Anglo-American literary theory, calling into question the critical consensus on pluralism's nature and its status in literary studies. Drawing on the insights of Marxist and feminist critical theory and on the works of Althusser, Derrida, and Foucault, Rooney reads the pluralist’s invitation to join in a "dialogue" as a seductive gesture. Critics who respond find that they must seek to persuade all of their potential readers. Rooney examines pluralism as a form of logic in the work of E. D. Hirsch, as a form of ethics for Wayne Booth, as a rhetoric of persuasion in the books of Stanley Fish. For Paul de Man, Rooney argues, pluralism was a rhetoric of tropes just as it was, for Fredric Jameson, a form of politics.

Ellen Rooney is Professor of Modern Culture and Media and English at Brown University. She is coeditor of differences: a journal of feminist cultural studies and associate editor of Novel: A Forum on Fiction.