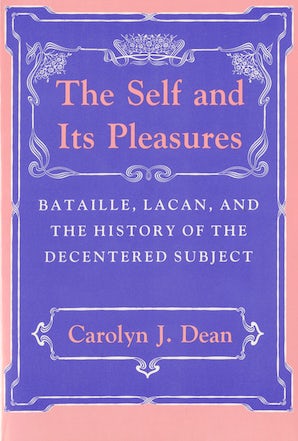 The Self and Its Pleasures is licensed under a Creative Commons Attribution-NonCommercial-NoDerivatives 4.0 International License.

The Self and Its Pleasures

Bataille, Lacan, and the History of the Decentered Subject

Why did France spawn the radical poststructuralist rejection of the humanist concept of 'man' as a rational, knowing subject? In this innovative cultural history, Carolyn J. Dean sheds light on the origins of poststructuralist thought, paying particular attention to the reinterpretation of the self by Jacques Lacan, Georges Bataille, and other French thinkers. Arguing that the widely shared belief that the boundaries between self and other had disappeared during the Great War helps explain the genesis of the new concept of the self, Dean examines an array of evidence from medical texts and literary works alike. The Self and Its Pleasures offers a pathbreaking understanding of the boundaries between theory and history.

"Carolyn J. Dean's book is an intelligent, well-researched, and thought-provoking study of an important problem in modern cultural and intellectual history. Focusing on the difficult work of Jacques Lacan and Georges Bataille, Dean furnishes a critical history of the decentered subject in early twentieth-century France—a history that has broader implications given the widespread influence of modern French thought."

"Carolyn J. Dean's central question in this complex and allusive book is 'why has France been the home of a certain model of self-dissolution?’, and the answer is pursued largely in the criminolegal and psychoanalytical domain, eschewing the more literary ‘death of the author’ institutionalized by Barthes."

Carolyn J. Dean is Charles J. Stille Professor of History and French at Yale University. She is the author of several books, including The Fragility of Empathy after the Holocaust and Aversion and Erasure: The Fate of the Victim after the Holocaust, both from Cornell, and The Frail Social Body: Pornography, Homosexuality, and Other Fantasies in Interwar France.

The Self and Its Pleasures is licensed under a Creative Commons Attribution-NonCommercial-NoDerivatives 4.0 International License.