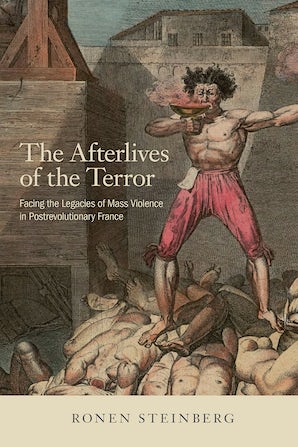 The Afterlives of the Terror is licensed under a Creative Commons Attribution-NonCommercial-NoDerivatives 4.0 International License.

The Afterlives of the Terror

Facing the Legacies of Mass Violence in Postrevolutionary France

The Afterlives of the Terror explores how those who experienced the mass violence of the French Revolution struggled to come to terms with it. Focusing on the Reign of Terror, Ronen Steinberg challenges the presumption that its aftermath was characterized by silence and enforced collective amnesia. Instead, he shows that there were painful, complex, and sometimes surprisingly honest debates about how to deal with its legacies.

As The Afterlives of the Terror shows, revolutionary leaders, victims' families, and ordinary citizens argued about accountability, retribution, redress, and commemoration. Drawing on the concept of transitional justice and the scholarship on the major traumas of the twentieth century, Steinberg explores how the French tried, but ultimately failed, to leave this difficult past behind. He argues that it was the same democratizing, radicalizing dynamic that led to the violence of the Terror, which also gave rise to an unprecedented interrogation of how society is affected by events of enormous brutality. In this sense, the modern question of what to do with difficult pasts is one of the unanticipated consequences of the eighteenth century's age of democratic revolutions.

Thanks to generous funding from Michigan State University and its participation in TOME (Toward an Open Monograph Ecosystem), the ebook editions of this book are available as Open Access (OA) volumes, available from Cornell Open (cornellopen.org) and other Open Access repositories.

"Steinberg's excellent new book looks at the aftermath of the Reign of Terror in France through the modern lens of transitional justice."

Ronen Steinberg is an Assistant Professor of History at Michigan State University.

The Afterlives of the Terror is licensed under a Creative Commons Attribution-NonCommercial-NoDerivatives 4.0 International License.